The Consortium for the Protection of Aglianico del Vulture is a non-profit association, formed on 12 April 1986 and registered in the Register of Companies of POTENZA since 19 February 1996, which brings together vine-growers, winemakers and bottlers, single or associated, who produce doc Aglianico del Vulture wine.  The Consortium was set up for the enhancement, image promotion and protection of the doc Aglianico del Vulture wine, which is obtained from grapes from the vineyards located in the production area, defined and delimited as such by the Production Regulations approved by the Italian Presidential Decree of 18 February 1971

The Consortium for the Protection of Aglianico del Vulture aims to: 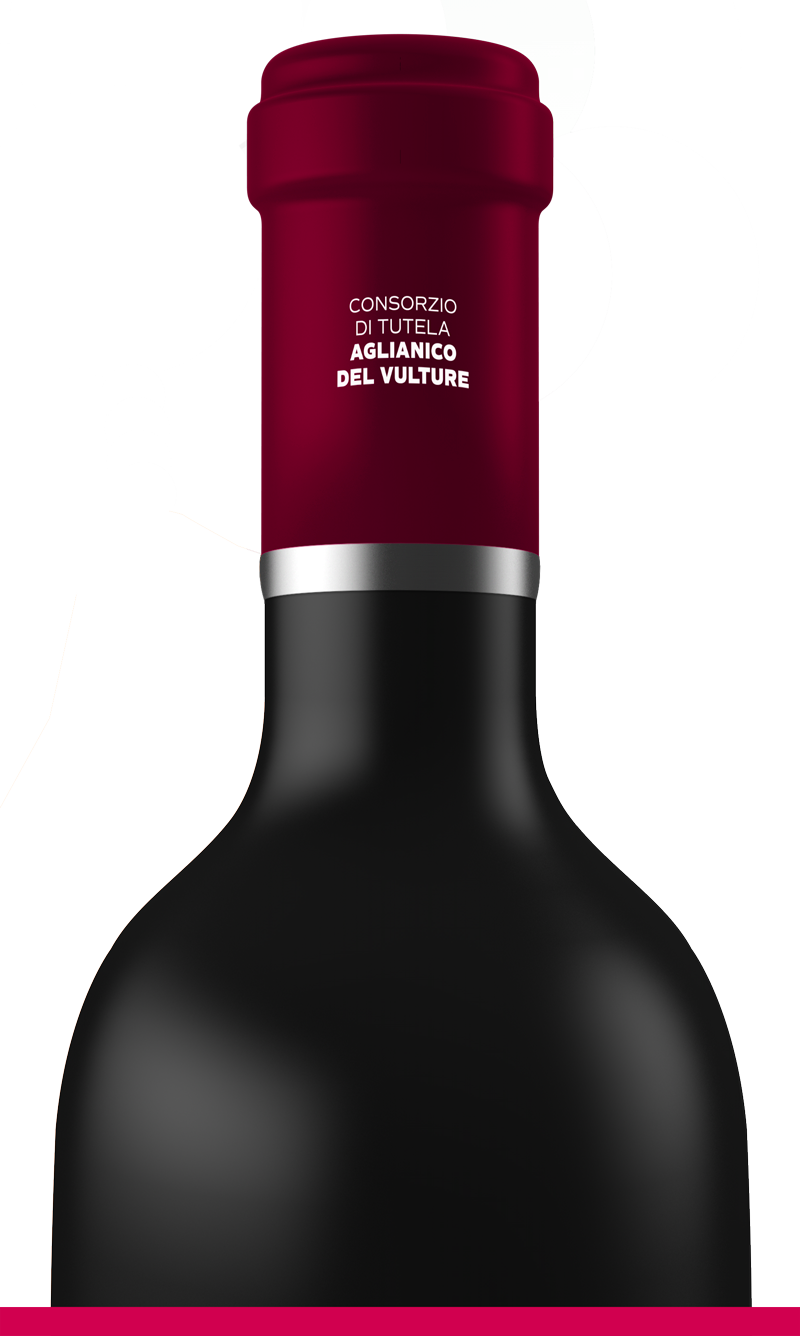 Land of brigands and of the poet Horace, the Vulture has made the nectar of the Aglianico vine one of the enogastronomical excellences of Basilicata. The area, located in the north-eastern part of the Basilicata region, includes the municipalities of Atella, Barile, Ginestra, Melfi, Rapolla, Ripacandida, Rionero in Vulture, Maschito, Venosa, Ruvo del Monte, Rapolla and San Fele. The name of this area derives from the mountain massif of Monte Vulture (1326 m), an extinct volcano from prehistoric times. Frequented since ancient times, the Vulture has been a meeting point for different civilisations such as the Daunians, Peucetians, Lucanians and Samnites up to the long Roman and Norman-Swabian domination. It was in the castle of Melfi that Frederick II promulgated the “Constitutiones Augustales”, the oldest text of written laws of the Middle Ages. In short, a magical and timeless place where nature and history meet in a fruitful and indissoluble interweaving of landscape and traditions.

To call it just ‘wine’ would be reductive. Aglianico is also and above all a story of a people and of a place with a strong and decisive identity, just like its wines.  A late vine which needs a lot of time and suitable climates to get to the right maturation, Aglianico has found an ideal habitat on the lands of a volcano which has been extinct for millennia: the Vulture, which rises austerely and solemnly in the northern tip of Basilicata, on the border with Puglia and Campania.  Brought to Italy by the Greeks, with the name Hellenica, the Romans called it Hellenic and used it to improve the quality of Falerno, a wine which was very popular among the poets of the time. In the fifteenth century, under the domination of the Aragonese, it was named Aglianico. With its ruby ​​red colour, its fragrant and vinous scent, its dry, savoury and harmonious flavour, since then it has not stopped conquering the most demanding palates and gaining a place of honour among the best Italian wines.

The Consortium is administered by a Board of Directors, made up of a president and eight directors, and a Board of Statutory Auditors consisting of a chairman and four statutory auditors, two of whom are deputy auditors.